How The One Hitter (And The Beach Boys) Revamped My Mind

Hotels and casinos are begging tourists to return to the Strip. Is it safe? Is it worth it?

byRobyn Griggs Lawrence
in The Life
Reading Time: 6 mins read
A A
Share on FacebookShare on Twitter

A week before our trip, Leah sent me an article that was giving her cold feet. “Crowds swarm the Las Vegas Strip as casinos reopen,” The Hill headline screamed. Nevada Gov. Steve Sisolak had signed an emergency directive increasing capacity at casinos and other venues from 35 percent to 50 percent. A photo showed a throng of people, some masked and some not, strolling shoulder-to-shoulder along the Strip.

Leah and I chose Vegas as a meeting spot because it was easy for both of us to get to, halfway between our homes in Colorado and Oregon. With everything running at 35 percent capacity, it seemed like a safe enough destination—and it didn’t hurt that the Four Seasons was offering a stay-two-nights-get-two-free deal. We made plans to check out the scene at a few local dispensaries, get work done by the pool, enjoy a few amazing meals, and maybe a little blackjack.

The last time Leah and I traveled together, to a mushroom hunt in Long Beach, Washington, she got Covid. I, miraculously, did not.

“If I get sick, I’m never traveling with u again, ha ha,” she texted.

But the weather forecast was perfect—sunny and mid- to high 70s, a far cry from snowy Boulder and dreary Portland. And so many people had already been vaccinated. We promised each other we would be zealous about social distancing and double masking and hand washing and all the things.

A couple days later, I sent Leah a Huffington Post article saying that catching Covid twice is rare. “They’re just guessing!” she texted back. “I’m fine. If I die after the Four Seasons, I’ll die happy!”

I needed this trip. After three years of living on the road and wintering in warm climates, I’d settled down in a condo, endured a winter, and limited my travel to only what was necessary—that mushroom hunt in the rainy Northwest and a couple trips to Omaha to visit my daughter. Neither destination did anything to satisfy my deep, primal need for an afternoon spent dozing under a palm tree. Ideally, that palm tree would be on a beach, but given the circumstances, the socially distanced Four Seasons pool would do.

When I flew Southwest to Portland and Omaha, the airline was blocking off middle seats—an unexpected little Covid benefit that took a lot of stress out of being in the C group. That ended on December 1, 2020, so I spent the extra $20 for early bird check-in to give myself an advantage in finding a safe seat. As I filed in with the A group, I spotted an older woman sitting up front in a middle seat and grabbed the aisle seat next to her.

“Just so you know, I’m fully vaccinated,” she said after I buckled up.

Yes! “That’s why I picked you,” I said, settling in for a relaxing trip.

At the hotel, a bellman stopped us on our way to the front desk and asked us to stand in front of a machine that took our temperature. I was nervous, the way you feel when a cop pulls up behind you, even when you’re not breaking any laws. What would happen if my temp was elevated from lugging my big bag and my excitement about traveling again? Who would take me in if I had to quarantine in Vegas? Why had I done this to myself when I was this close to getting vaccinated?

I sighed with relief when the bellman said my temperature was 98.7 and promised him I would come down every 24 hours to check it again. (Spoiler alert: I forgot.) 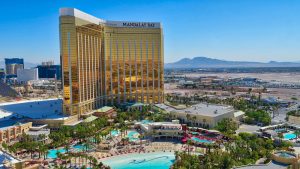 The Four Seasons and Mandalay Bay are at the south end of the Strip, away from the main hustle. We were expecting it to be quieter there. We just weren’t expecting it to feel like we’d been dropped into Mormon gambling camp.

Granted, we visited Sunday through Tuesday—the slow part of any week anywhere, pandemic or not. But it was eerie to walk through the Mandalay Bay casino and see a smattering of people sitting joylessly at well-spaced slot machines and lonely dealers sanitizing chips behind plexiglass. It was so quiet, and everybody looked a little confused, like they’d forgotten how, exactly, they were supposed to behave in public (let alone Vegas).

“Do you want to play?” I asked Leah as we passed the slots.

“No one’s winning,” she said, and she was right. The absence of ding-ding-dings was loud.

Another surprise that contributed to the Mormon camp vibe: 7 p.m. (or earlier) closing times at nearly every Mandalay Bay restaurant. Really? Desperate for sustenance at 7:15, we traipsed back through the casino and up to our room to order a cheeseburger and a pizza from a special abbreviated Covid room service menu. The food wasn’t up to Four Seasons standards, but it wasn’t prohibitively expensive, and our room had a decent view of the half-lit Strip.

We reserved a poolside cabana for the next day for roughly the cost of that free night we were getting and felt, all in all and given the circumstances, like we were winning.

Masks Down, Hair Up

Last March, when the neon lights blinked off and #VegasStronger messages (#VegasStrong had already been used for the 2017 shooting) blinked on, it was the first time the Strip had shut down since President John F. Kennedy’s funeral in 1963. Tourists have been trickling back in since hotels and casinos began to reopen in June, but the town is a ghost of what it was in 2019. Visitors and hotel occupancy have death spiraled by more than half, according to the Las Vegas Convention and Visitors Authority.

Nevada needs tourists for its economy like I need palm trees for my sanity. It relies on tourism dollars more than any other state in the country, and it’s doing everything it can to bring people back. Hotels and casinos are offering crazy deals to lure work-from-anywhere nomads, and TV commercials are calling on people to “let your hair down, but keep your mask up.”

Mandalay looked to be hitting about 50 percent on those suggestions. And while you’d love to think all those unmasked tourists had been vaccinated, that would be an oxymoron.

At the Four Seasons pool, the staff did their best to get people to keep their masks on, and their job wasn’t easy. The policy was that you could have your mask off if you were actively eating or drinking, so all you had to do was keep your hand on a drink or even an open water bottle to get a pass.

We were allowed to take off our masks inside our cabana, and I forgot to put it on when I went to the bathroom more than once. We’ve been doing this mask thing for a year now, and sometimes I’m still a moron.

A Mob at the Flamingo

We had planned to hike Red Rock Canyon after picking up libations at the Apothecary and cannabis superstore Planet13, but transportation was proving a problem. We had to wait at least 20, even 30 minutes for Lyfts and had our hearts broken by a couple times by no-shows. One driver told us people weren’t driving because they’re getting unemployment. Then he pointed out the row of pylons lining the street and said they were there to stop cars from mowing down tourists.

We couldn’t risk a no-show Lyft at a remote canyon 25 miles away from our hotel, so we pivoted—and took a wrong turn. We should have gone back to the Four Seasons pool. Instead, we did a Google search for quiet spots in Vegas and ended up smack dab in the middle of the Strip at the Flamingo Hotel & Casino. The Art Deco relic built by Bugsy Siegel in 1946 (and rebuilt in 1953) includes a Wildlife Habitat that Vegas.com promised would “feel miles away from the hustle and bustle of the resort.”

The place was mobbed. It’s hard to say why. Maybe everyone Googled “quiet spot in Vegas” that day or maybe it’s listed somewhere as a great place to get Instagram pics with birds. We took refuge on a bench as our cannabis beverages kicked in and a constant stream of people strolled by, stopping to pose in front of incarcerated flamingoes and pelicans.

By the time we waited for a Lyft, it was 5 p.m. We headed straight for the Border Grill at Mandalay Bay and ate flank steak at a corner table in the bar. Service was a little slow because the bartender was serving everyone in the bar area while also making drinks for everyone in the restaurant, but he made us a special raspberry-lemon drop mocktail that was worth the wait.

It felt festive, even if it was only 5:30. We toasted, to sunshine and palm trees, zombie tourists and depressed flamingoes. To Vegas at its weirdest ever.

How The One Hitter (And The Beach Boys) Revamped My Mind