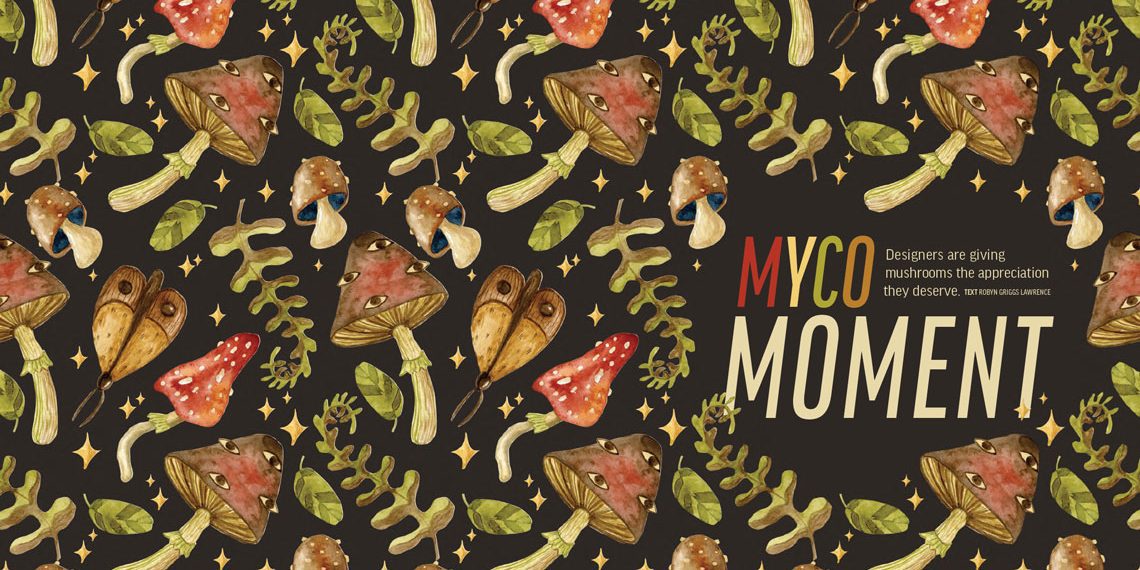 Designers are giving mushrooms the appreciation they deserve.

Plaid. Pink. Pineapples. Minimalism. Maximalism. Mushrooms. What these things share in common, aside from alliteration, is that they all have recurring moments—in art, in home décor, on the runways—bouncing in and out of the zeitgeist, embraced one decade and shunned the next.

For the weird at heart, fungi never go out of style. There’s just something about toadstools and fairies, Alice and the white rabbit. Mushrooms turn us on. Whether or not we enjoy eating them for culinary pleasure or spiritual exploration (and we usually do both), we can’t help but admire all the naughty shapes and sexy spores that populate this kingdom, which is neither plant nor animal.

The good news for mycophiles is that right now, mushroom appreciation is at an all-time high. Mushrooms have invaded our homes and closets, dancing on curtains and rugs at Etsy and Society6 and wallpaper at Spoonflower, popping up in clothing stores from H&M to Forever 21, featured prominently in collections by designers like Stüssy and Marc Jacobs. Women’s Wear Daily declared them a star of Paris Couture Week earlier this year as Iris Van Herpen and Rahul Mishra debuted fungi-inspired pieces. Van Herpen’s show even included computer animations of a swirling spore cloud as models floated down the catwalk.

Mushroom mania superbloomed last fall when Bella Hadid stepped out in an ensemble that included baby mushroom earrings by Frasier Sterling, a silver mushroom necklace (designed to protect against bad trips) by Electro Magnetic Studios, a vintage bag with mushrooms etched on it, and even spore-dotted fingernails. Hadid has also posted shots of herself wearing a shirt with a mushroom and the words Eat Me.

Every culture has a different take on mushrooms—some love them, some fear them. Medieval Flemish painters incorporated toadstools into their paintings to represent the underworld, while the psychedelic artists of the 1960s and ’70s portrayed mushroom trips as a sort of heaven.

Artists from Tokyo to London are also waking up to the mushroom’s magic. One of them is Seana Gavin, a London-based artist known for her photographs of the 1990s free party rave movement. She’s getting rave reviews for her psychedelic collages made from vintage photographs that often feature weird and wonderful mycelial figures. “Gavin’s brightly spaced-out collages,” Dazed magazine wrote, “capture the acid-drenched mood of the zeitgeist.” 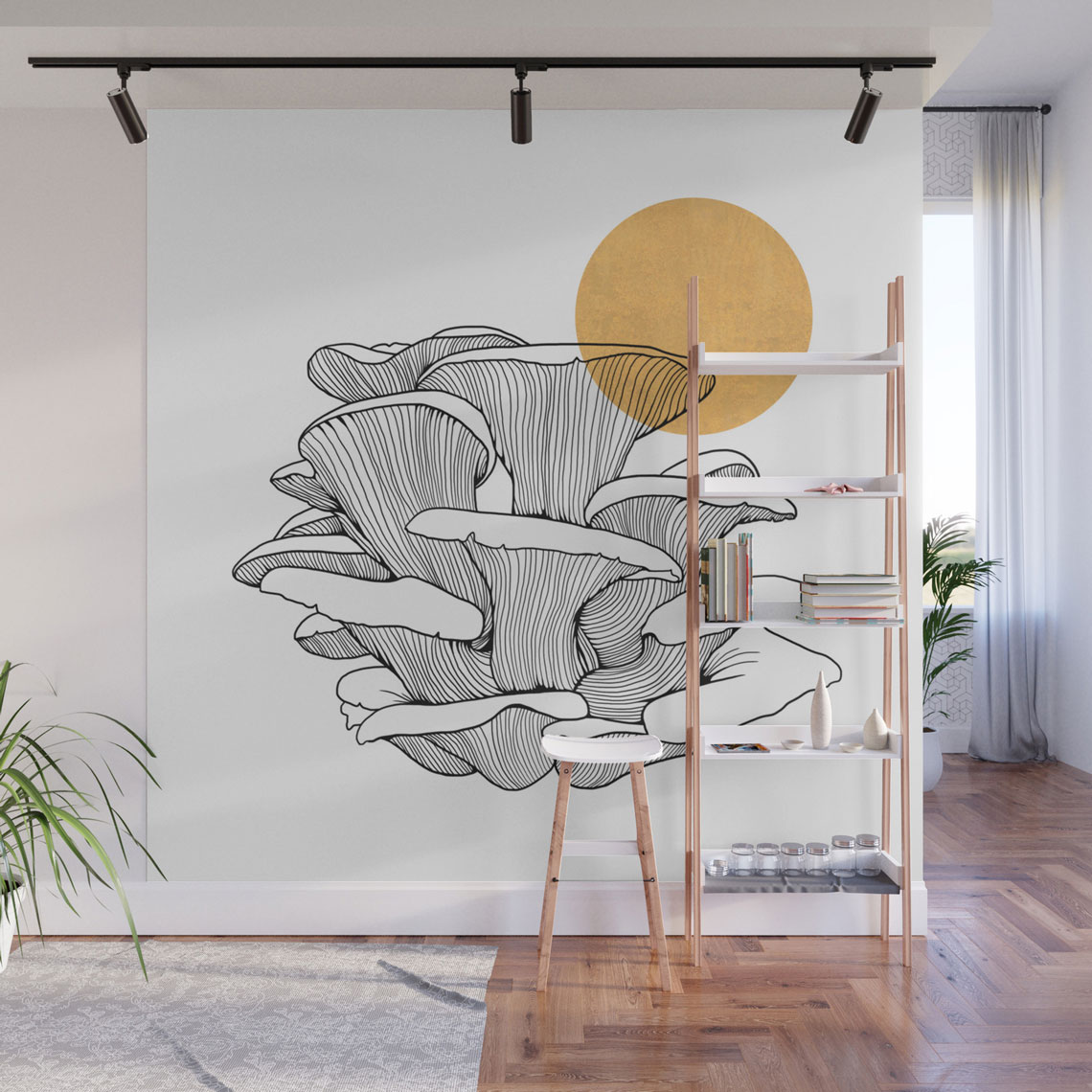 This zeitgeist was editor Francesca Gavin’s motivation for curating Mushrooms: The Art, Design, and Future of Fungi, an exhibition showcasing mushroom-influenced work by artists, designers, and technologists that opened in January 2020 at the Somerset House in London. The show was packing in more than 2,000 people per day when the pandemic shut it down. “I kept noticing artists working with mushrooms,” Gavin explained in a brief about the exhibit’s genesis. “I read Anna L. Tsing’s The Mushroom at the End of the World quite soon after its release and fell into a wormhole of mushroom facts. At this moment of climate crisis, treating something like mushrooms with respect and fascination feels more pressing than ever.”

Tsing’s 2016 book exploring matsutake mushrooms and the people who forage for them in Oregon, Yunnan, Lapland, and Japan is a modern parable of destruction and resilience in late-stage capitalism. The publisher describes it as “an original examination into the relation between capitalist destruction and collaborative survival within multispecies landscapes, the prerequisite for continuing life on earth.” 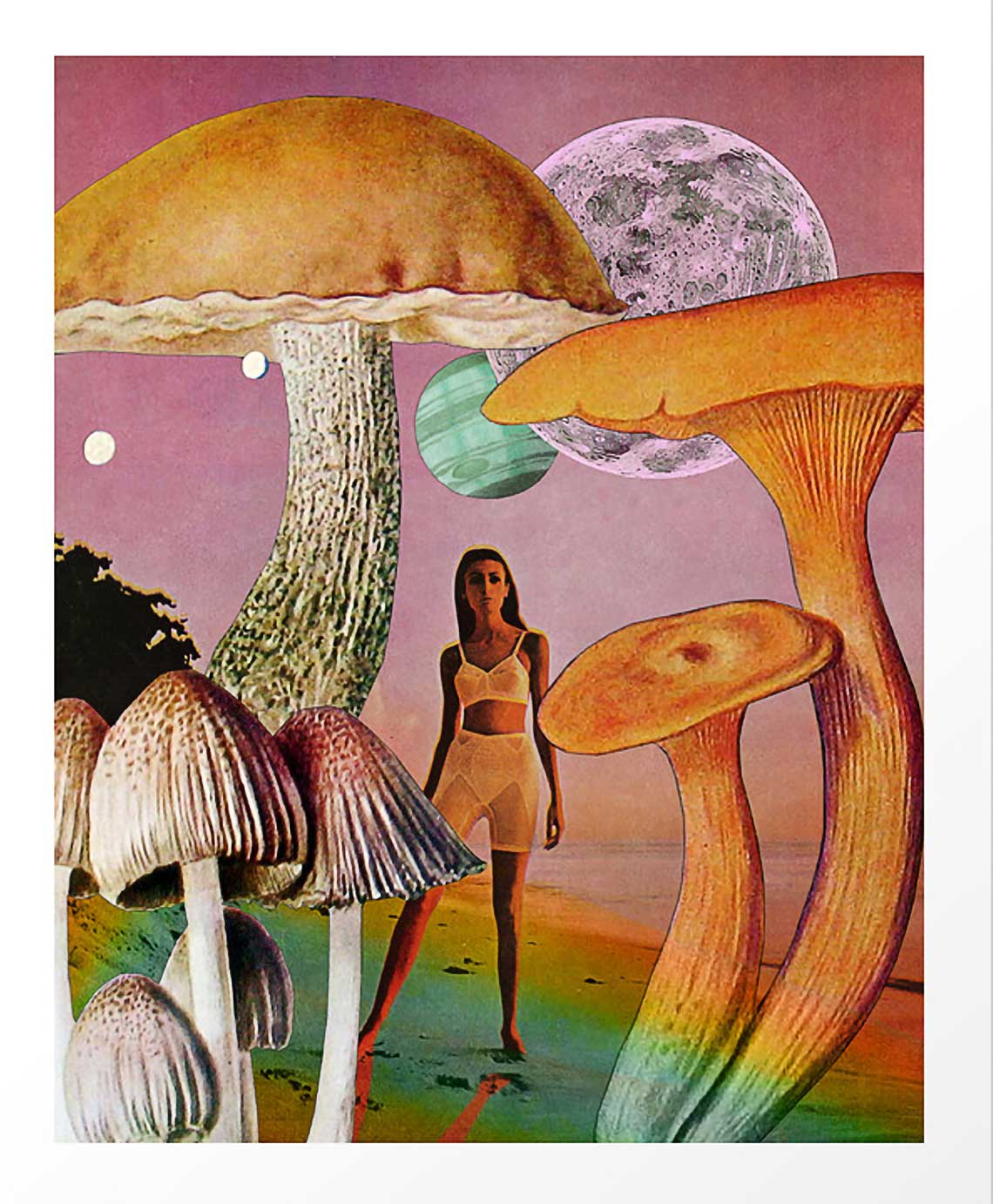 Mushrooms have been inspiring visionary art since we first found shelter in caves, if you believe ethnobotanist Terence McKenna. In Food of the Gods: The Search for the Original Tree of Knowledge, he describes 9,000-year-old cave paintings at Tassili n’Ajjer in Algeria that depict shamans tripping on mushrooms. “The shamans are dancing with fists full of mushrooms and also have mushrooms sprouting out of their bodies,” McKenna says. “In one instance, they are shown running joyfully, surrounded by the geometric structures of their hallucinations.”

We’ve been adorning our homes and ourselves with mushrooms of all kinds (not just the magic ones) ever since. Every culture has a different take—some love them, some fear them. Medieval Flemish painters incorporated toadstools into their paintings to represent the underworld, while the psychedelic artists of the 1960s and ’70s portrayed mushroom trips as a sort of heaven. David Singer’s 1970 Grateful Dead poster “The Mushroom Man,” a great example, shows a small man dwarfed by two huge mushrooms; it’s meant to depict humans, stripped of all vanities, padding toward the cosmos via the magical mushroom portal.

That portal is certainly a big part of why we’re so charmed by fungi—especially now, as we find ourselves desperate for solutions to a mental health crisis pushed to frightening new heights by the pandemic. But mushrooms have a lot more than psilocybin to offer humans, and we’re just beginning to tap into their potential. As we do, it’s becoming clear that they truly could make it possible for us to continue living on this earth, as Tsing asserts.

We’re just beginning to tap into the potential of mushrooms. As we do, it’s becoming clear that they truly could make it possible for us to continue living on this earth.

Mycelium, the stringy vegetative tissue of mushrooms, is emerging as a natural, environmentally superior building material that can be used to replace toxic, resource-intensive products like leather, engineered wood, and plastic. Simply by manipulating the growing conditions, engineers can turn mycelium into a lightweight foam, a durable brick, and everything in between.

Mycelium + Timber furniture and lamps from Sebastian Cox, for example, are made from willow strips and a fungus cultivated on willow strips—a completely natural wood composite.

Perhaps my favorite mushroom innovation, the one I hope will gain wide acceptance, follows a similar concept—with humans as the willow strips. South Korean artist Jae Rhim Lee created a burial suit filled with mushroom spores that have been fed bits of her skin, hair, and nails so they’ll recognize her as food. When Lee is buried in the suit, Mother Nature’s apex decomposer will devour her body, leaving behind no trace of it and the toxins it once contained.

Furniture designer Sebastian Cox and researcher Ninela Ivanova are creating furniture and lamps from a mycelium and wood composite product they invented for a project they call Mycelium + Timber. It’s genius: Fomes fomentarius, a fungus cultivated on willow strips, is added to molds made from the same type of willow strips. As the fungus eats its way through the mold, it leaves behind a soft, leather-like material. 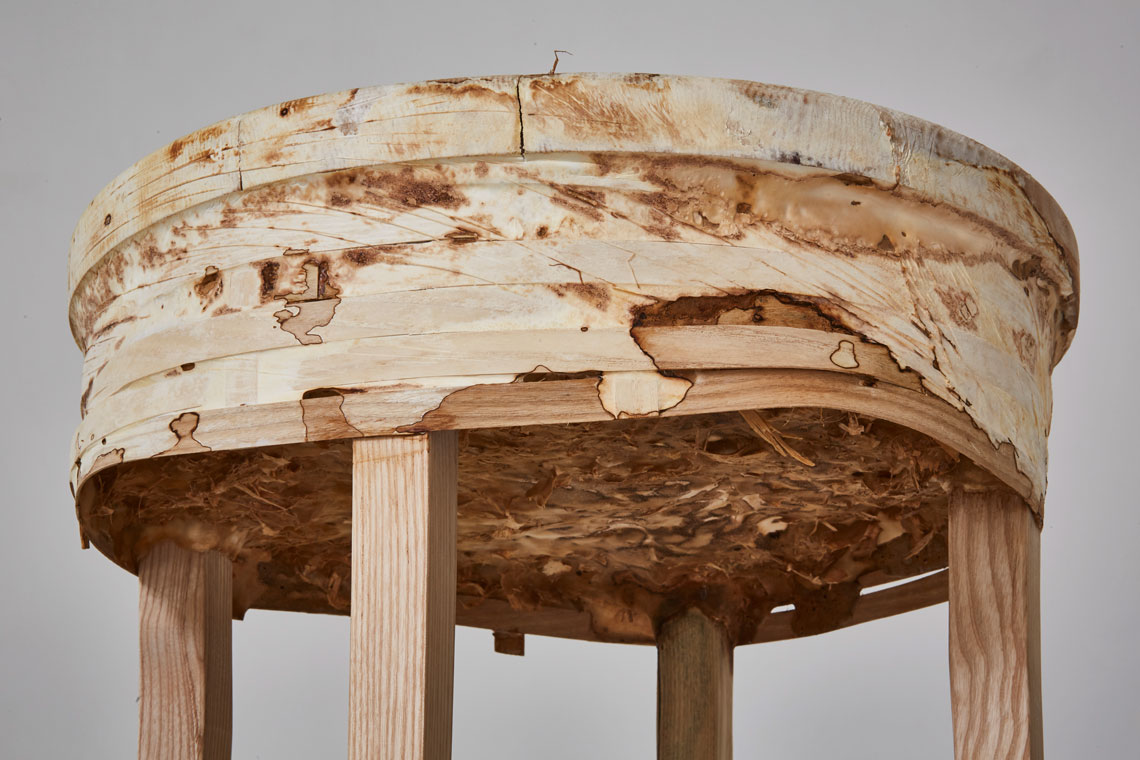