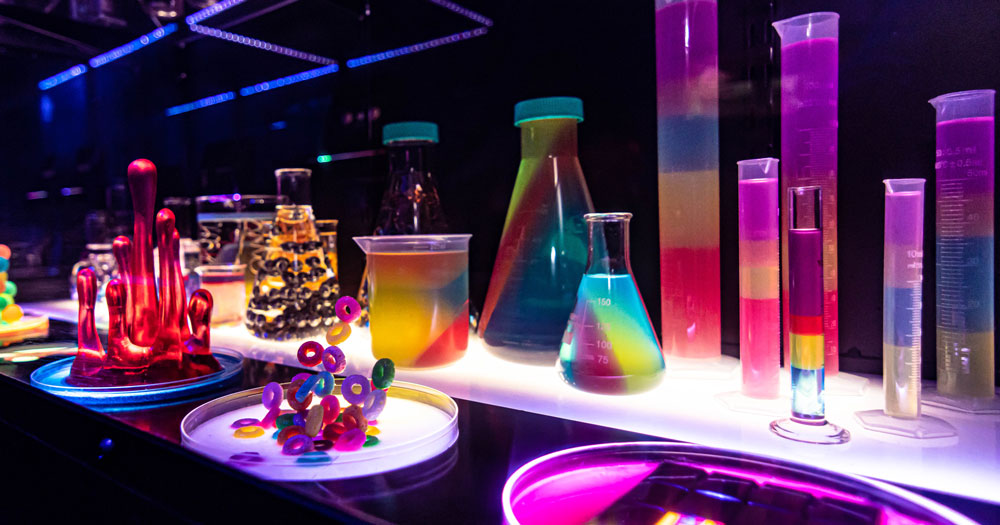 Nevada: Go Inside and Play!

Nothing is as it appears in this “big box store” of art.

You might enter Omega Mart in Area15, “America’s Most Exceptional Grocery Store,” looking for a snack among items like Impact Corn, Caltucky Freedom Glaze, or Americanized Beef. The juxtaposition of familiar things and unknown territory rapidly becomes apparent.

Quickly you’ll realize that Omega Mart is a gateway of the imagination. It’s a world of inspiration, play, and transformation, a totally unpredictable immersive art experience.

In February, Santa Fe–based arts and entertainment company Meow Wolf debuted its second permanent installation, Omega Mart. More than 325 creatives worked on over 250 unique projects inside four vast anchor spaces. There are 60 environments with installation-filled rooms, terrains, and portals to other spaces. Over 50 visual and musical artists collaborated on Omega Mart, including world-renowned artists like Shrine, Amon Tobin, and Android Jones.

Behind rows of “consumer goods,” visitors are invited through portals—like a refrigerated beverage case and a camping display—into four themed areas, Omega Mart, Dramcorp, Factory, and The Projected Desert. The façade opens up to an underground river that leads to a behind-the-scenes corporate entity (lost in the 20th century, according to the story), as well as a Tron and Mad Max-inspired maze. Psychedelic art morphs into transcendent interiors.

“This is actually the third Omega Mart,” says Jim Ward, Chief of Content and Co-CEO
of Meow Wolf. “It was originally done as an experiment, then as an installment in Santa Fe, and now the third expression has come to Las Vegas.”

In one room, decades collide as the projection of a spindle for a 45 record covers one wall while geo-metrics—Upload_Ghost_s 2021, created by artist Stephen Hendee—cut patterns in the room as music fills the space. “We really like the designs of this artist— the low poly and low design. We paired his work with [musical artist] Beach House,” explains Marsi Gray, a senior creative producer. In another space, shapes mutate on the walls like ice crystals. Inspired by a trip to Yellowstone National Park, the artist expresses the fluidity of nature.

The artists who collaborated on Omega Mart represent diverse perspectives and communities. “We support marginalized artists in under-supported communities in any community we enter,” explains Ali Rubinstein, Chief Creative Officer and Co-CEO of Meow Wolf. “This exhibit is technology-driven, which certainly fits Las Vegas. As we grow, we will change spaces, add, and expand as an evolving exhibit to represent the culture and community of Las Vegas.”

Double the Santa Fe installation’s size at 52,000 square feet, Omega Mart took three and a half years to create. A third permanent Meow Wolf installation is scheduled to open in Denver in late 2021. Meow Wolf—the only certified B-Corporation in the themed entertainment industry—is dedicated to building a more sustainable and inclusive arts economy.

Want to try them for yourself? Good luck. There is no signage; visitors must discover the secret cocktail lounge through the various portals, visiting spaces and exploring the immersive landscapes.