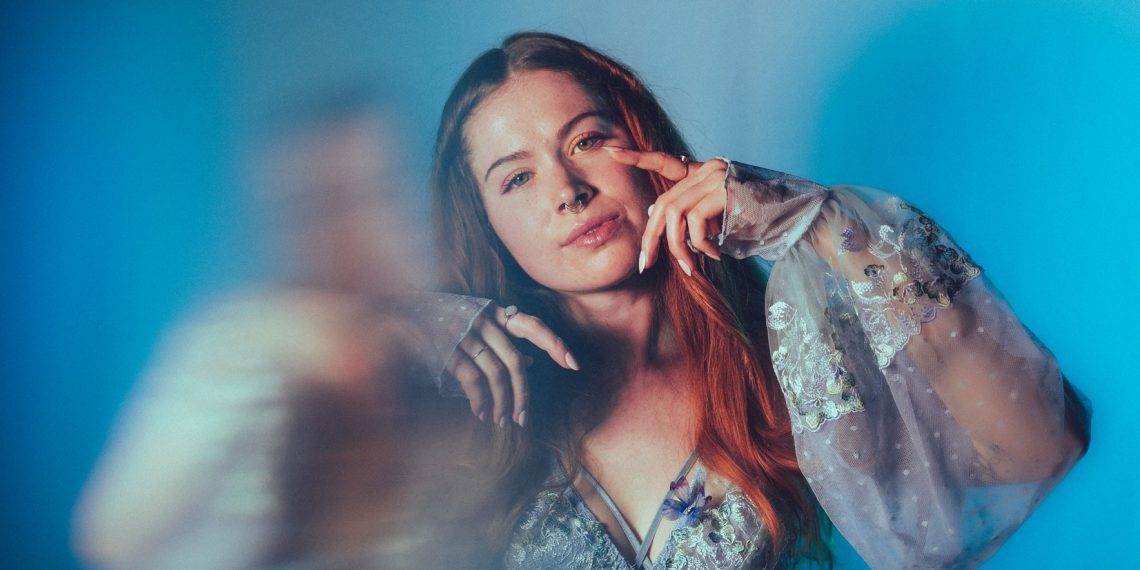 Lillian and the Muses Combine Song And Sight

byDoug Schnitzspahn
in Cover Stories, Feature, The Scene
Reading Time: 7 mins read
A A
Share on FacebookShare on Twitter

New artist on the scene, Lillian Siebert, aka Lillian and the Muses, is bending genres, combining Americana and hip hop to craft songs for a new sensibility. In the midst of the pandemic, the Vermonter hit the road for California in search of endless spring, collaboration, and new visions. Here’s a peak into the process of a musician who is breaking ground for a generation on the rise.

After driving 10,00 miles and spending three months on the road, Lilian Sieber found her muse—make that Muses. A musician, photographer, and videographer who was raised in rural Vermont, and studied at Boston’s Berklee College of Music, the 24-year-old Siebert records and performs as Lillian and the Muses but the pandemic hit the up-and-coming talent hard, as it has so many performers. And like so many other musicians faced with the isolation of COVID-19, Siebert created art in the midst of it all. Lillian and the Muses combine song and sight, Siebert often sees the visual narratives of songs as she writes them, so the Vermonter headed to the sunny sands of Los Angeles to film videos of the songs “Cigarettes” and “Devil in the Details” from Lillian and the Muses new, eponymous EP. The plan was to collaborate with Alissa Lise Wyle, a friend from Berklee who creates as Holy Smoke Photography, and chase spring across a country slowly awakening from the pandemic (“Spring” is also the title of Lillian and the Muses first single, which features a vide shot back home in Burlington, Vermont). So she and her father convened a van and she was off to California for a few months before chasing spring back to Vermont.

Lillian and the Muses may just befitting the scene but the music hinges on the crest of a wave of young artists who are not afraid to mash up genres. Trained in opera, Siebert centers herself in Americana, and is influenced by a line of Green Mountain State stars she saw growing up including Grace Potter and Anais Mitchell. But the new EP puts hip hop beats down under multi-layered vocals. It’s a unique sound representative of Gen Z’s rising streaming and genre-bending sensibilities but grounded enough to be an ear worm for any generation. Siebert took the time to talk to Sensi about her art, process, and, of course, muses.

You are a musician, a photographer, and a videographer—how do the visual and the musical come together in what you do?

I see them as intertwined. I can’t really have one without the other—at least in my mind. When I’m writing, I’m doing it from a place of a vision or a story, and, to do that, I need to be picturing it. So when we are making music videos, it’s a process of bringing that initial vision back to life. The video is very important to me—almost as much so as, as the music. I grew up with a lot of Americana and outlaw country and outlaw country growing up. So I am heavily influenced by stuff like John Prine and the glam of Dolly Parton. Then there are current artists I’ve always been into like Rachael Price from Lake Street Drive and Lana Del Rey, and there’s a great Norwegian singer Aurora who I really love. A lot of those groups focus on pretty dramatic retellings of music through a video.

How do you think about transforming a song into a video?

It usually takes the form of sitting down and listening to the song on repeat with my eyes closed until I can picture every second of every frame. Then I just write it down like a crazy person. I just start scribbling. I have a tendency to know exactly how I want the shot to be done because I’m familiar with lenses and framing. So I usually come in with an Excel spreadsheet with a second to second time code. Then we take it from there. I want to make sure that the artistic integrity of whomever I’m working with really has a lot of voice in it, too, because that’s why you hire someone who’s talented. You don’t want to be reigning them in.

You are a videographer yourself but you hired LA-based Alissa Lise Wyle of Holy Smoke Photography to make videos for the songs “Cigarettes” and “Devil in the Details” from your new EP. Why?

So this is funny. Alissa and I have completely opposite styles when it comes to video. But I absolutely adore that; it’s why I hired her. I wanted what she can do, and that is not my specialty. It that was one of those things where I could outsource to someone who’s awesome. And I was happy to do that because I appreciate her work. As far as shooting my own stuff goes, I’m a big proponent of anybody who can do everything on their own—make their own beats, sing their own stuff, shoot their own video—but I’m really focused on community. I would so much rather have specialists and people who are invested and excited in your work to create something you can all be proud of instead of trying to go it alone.

So I mean, that one for me was exciting because I was going to be able to give Alissa more wiggle room with a narrative. I’m always trying to structure everything perfectly, so that everything’s cohesive and the little nods to each moment makes sense in a storyline—but with “Devil in the Details,” there’s a lot more room for metaphor. It’s much more aesthetically driven, loose, with imagery that can be interpreted however the audience wants to interpret it. That gave Alissa a lot more freedom. I said, “Okay, these are the scenes that I’m picturing. You go crazy and editing have fun. That was great because, as I said earlier, I really want to give the artists I work with a chance to make something that they are proud of, not just something to which I’m looking forward.

Who are the Muses? Are they your band?

So I am Lillian and the muses are <ITAL>the muses<UNITAL>. The name is derived from Greek mythology and the idea of different muses for poetry, music, art… I’m very much of the mind that the world around you influences your work. So I think of myself as Lillian and the music is the omnipresent. That being said, it’s also great when I have people on stage with me, they suddenly become the muses. I have been performing out and the music takes on a more acoustic, soft Americana country sound to it, much truer to my roots.

You say you are influenced by Americana but, in the studio, you’re bringing a new twist with hip hop. How do you see that working and how do you like to meld those very different influences?

I try to not be too precious with each song that I write. I think a song can be produced by so many different people and have a completely different sound. On the EAP  I just released, the original producer and beat maker is Jarv, a rapper and producer based in Vermont. He had been intrigued by the idea of taking my acoustically written, pretty, country-inspired music and seeing if we could make it kind of classic hip hop and see where that would go. So we just started playing around with it and we found stuff that we really liked. We started mixing in a lot of my layered vocals, which added a completely different texture. It maybe pulled us a little bit away from classic hip hop, but much more into my own sound.

I’m just trying to do my best to pay homage to what I know is my sound and also try on different hats while I’m doing it. I’m not afraid to try a new genre or a new producer because who knows? It could sound awesome. It could sound awful. It’s like cooking—give it a try, add something. It might seem weird but I’m sure the first person who put salt on chocolate  said, “This has gotta be nuts.” You have to give it a swing and see how it sounds.

And, to spread out the influences even more, you studied opera in college. Is that still a big part of your music?

Opera prepared me for my work now, but it’s definitely not where my heart ended up. That being said, you can definitely hear it in the layered vocals in some of the work I’ve done. There’s some pretty high operatic things happening in the background. If you take a microscope to it.  There’s a sweet spot in my life for opera, but specifically choral music has always been something that I adore. I started it in middle school and didn’t stop all through college. I was so inspired by the, the layering of many, many voices, which is reflected in my music when I do all this vocal layering. I love that feeling of a choir, how it can be so immersive like an ocean, an overwhelming presence. When I’m writing, I write almost everything a capella in lieu of instruments, with vocal melodies that I just layer on top of each other. Sometimes I take that to some of my bandmates and they’ll just interpret it into chords and play instruments instead of the vocal melodies.  In some cases, like in “Spring,” we just keep the vocal melodies and that’s the heart of the structure of the song.

What do you most want listeners to get out of your work?

The music has to speak for itself. You can talk music all day, but you can’t really explain a sound or a feeling. So I’m excited to finally have this debut project out so that people can get a feel for it. What people can expect in the future is definitely more vocal layering. You really get a feel for that in my track “Spring.” I’m excited to incorporate more live instruments in the future as well. The sound of the pedal steel is something that I’ve been dreaming of for years, and I’m so excited to, to integrate it into my music.

I’m going to be putting out more music, more singles that are going to accumulate into an album. I’m excited about exploring some more of this kind of acoustic space and tracking some of that music, um, because you know, I’m still writing and we’re still growing and we’re still, you know, muses are flying in and out. We have different musicians that want to play. There’s just different inspiration going through my head. Um, and I want to make sure that Lillian and the music continues to be a malleable voice that grows and changes. Um, so not sticking to anything specific except for my roots and my song writing 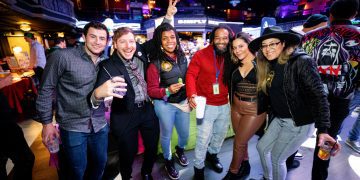