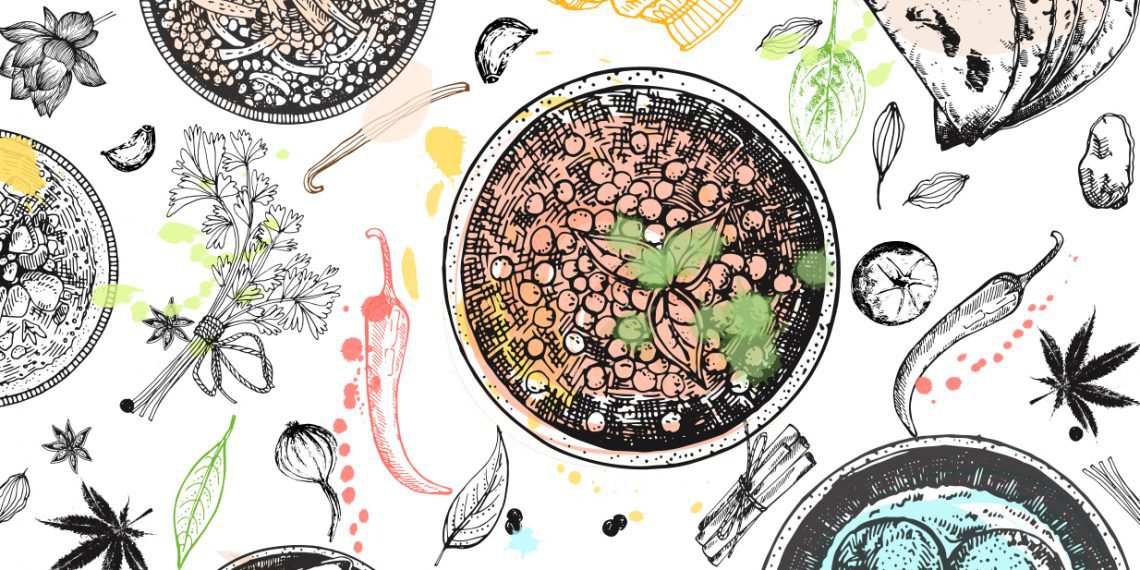 A Quick Journey Through The Culinary History Of Cannabis

byRobyn Griggs Lawrence
in The Life
Reading Time: 7 mins read
A A
Share on FacebookShare on Twitter

An excerpt from Pot in Pans: A History of Eating Cannabis by Robyn Griggs Lawrence (Rowman & Littlefield 2019)

From ancient India and Persia to today’s explosive new market, cannabis, the hottest new global food trend, has been providing humans with nutrition, medicine, and solace­—against all odds—since the earliest cavepeople discovered its powers.

We write history books, in part, so we don’t repeat our mistakes. The history of cannabis food, rich and deep, is marred with the stains of prohibition, propaganda, and persecution—abysmal mistakes we’ve only just begun to rectify. This history is a long way from being written—though many like to say we’re now on the right side of it as centuries of fearmongering finally start to unravel. Finally, but still painfully slowly, cannabis is taking its rightful place as a unique culinary ingredient that has proven through the centuries that food is medicine.

Locally, nationally, and globally, we’ve reached a pivotal moment in the history of a plant that has been beloved by the masses, reviled by the elite, and shrouded in conflict and secrecy for centuries. Cannabis has been outlawed and demonized since the powers-that-be first realized they could control the commoners by prohibiting a plant that they relied on for food, fiber, medicine, and mind and mood alteration. For the hard-working classes, who often lived in hopeless poverty, cannabis was magical for its ability to act as both stimulant and soporific and its promise of gentle relief from the drudgery and humiliations of daily life—a far cry from the sinister reputation foisted upon it by centuries of propaganda.

In the 1930s, during his successful drive toward cannabis prohibition, US Federal Bureau of Narcotics chairman Harry J. Anslinger masterfully fomented Americans’ racist and increasingly moralistic national mentality with a propaganda blitzkrieg that included a book and motion picture titled Marihuana: Assassin of Youth—based upon his discovery of the Old Man of the Mountain legend. In testimony before Congress and in newspaper interviews, Anslinger said marijuana, a frightening “new” drug used primarily by Mexicans and African Americans, could turn upstanding, middle-class kids into helpless victims and raging monsters. His campaign resulted in cannabis being effectively outlawed through draconian taxes and regulations in the Marihuana Tax Act of 1937.

Down through the ages—through multiple prohibitions on every continent, imposed by sultans, colonialists, and a pope—cannabis had managed to somehow survive, and even thrive. But never had it faced an enemy so formidable or iron-fisted as the United States in the mid-20th century. When US Treasury Secretary Andrew W. Mellon appointed Anslinger and tasked him, for whatever reason—and speculation is rampant—to wipe out cannabis, he intended the war to be global. Throughout the rest of the 20th century and into the 21st, the United States used its considerable influence to force cannabis prohibition around the world, leaving people in countries where it had been used and enjoyed for centuries scratching their heads in confusion—and finding ways around the laws.

In Canada in the 1930s, when Royal Mounted Police officers told an elderly woman they had to eradicate the hemp plants she grew to feed her canaries, she chased them away with a broom. In Indonesia, cannabis continued to be a key ingredient in the traditional “happy” soup served at weddings and celebrations, just as it always had. India managed to keep on the right side of the United States while quietly allowing people to drink bhang, a traditional holy drink made from cannabis. By the 1970s, the Netherlands had adopted a policy of tolerance toward retailers and users while making cannabis cultivation and production illegal, creating a “back door” problem that no one wanted to replicate.

It was more than clear by the 1970s that the global war on drugs was a failure. Violent cartels were ravaging South and Central America, and heroin, cocaine, and cannabis remained readily available to those who wanted them. In the early and mid-1970s, several countries and US states decriminalized cannabis, but this attitude change was short-lived, squelched by marijuana’s association with dirty hippies and the counterculture. The Nixon administration doubled down, sending military helicopters to scorch cannabis farms from Orange Hill, Jamaica, to the mountains of Colombia’s Cauca region and declaring cannabis a Schedule I drug with no medicinal value, alongside heroin and LSD.

For a century now, cannabis has existed in most parts of the world only because humans’ love for it is so great that they’re willing to sacrifice being persecuted, imprisoned, having their teeth pulled out, and even being put to death for cultivating and nurturing it. The irony of prohibition, of course, is that the lucrative black market made it worth the risk and only drove breeders to develop ever-mightier plants delivering whopping amounts of psychoactive tetrahydrocannabinol, or THC. In the face of adversity, cannabis was no shrinking violet. The plant grew stronger, better, faster, and more potent—unstoppable, no matter how much paraquat the DEA threw at it.

If the history of cannabis proves anything, it is that you can’t keep a good plant down. A cabal of global elites is no match for this one, which in its cunning evolved to provide humans with nutrition, fiber, medicine, and, if you believe many ethnobotanists, the ability to make huge mental and spiritual leaps as a species. Had it not been for the latter—all due to the presence of that THC molecule—this would be a boring tale about a multifaceted, utilitarian plant that served humans in many different capacities for centuries. This is not that.

This is a story with many layers, spanning many continents, held together by the thread of an Islamic confection created to inspire a band of 12th-century fedayeen, which was ported throughout the Middle East, Central Asia, and beyond, invoking hilarity and hostility wherever it went. Inspired by this legend, Western intellectuals and literati, and then the masses, discovered and enjoyed cannabis, hashish, and majoun (a Moroccan candy mixed with cannabis) for much of the mid-19th century and into the 1930s, when Anslinger shut that down.

This is the story of how Brion Gysin, an ex-patriot artist and writer in Tangier, discovered majoun, typed up a recipe, and sent it to Alice B. Toklas, an ex-pat writer in Paris, to include in a cookbook published in New York and London, causing a minor scandal in the mid-20th century and leading to a major mix-up in a major motion picture that morphed majoun into the pot brownie, and turned the pot brownie into a Western icon forevermore. It’s the story of the rowdy band of artists, rebels, and intellectuals who partook of majoun’s charms and an activist who made the pot brownie a symbol of compassion.

Down through the ages, the cannabis plant has gathered about it a charismatic and eclectic assortment of protectors and advocates, from the Hindu lord Shiva, who was said to sustain himself for long periods by eating cannabis, to Brownie Mary, whose insistence on baking cannabis-laced brownies as medicine for AIDS patients in San Francisco, despite several arrests, drew huge public sympathy in the 1990s and eased the way for California to legalize medical marijuana in 1996.

And that, really, may have been the beginning of the end of the pot brownie. Several states and countries followed California in approving cannabis for medical use, and in 2012, Colorado and Washington voters took the game-changing step of legalizing all adult use. More states followed, then Uruguay, then Canada. Cannabis-infused edibles grew into a robust and well-regulated industry with no room for crumbly chocolate cakes that had miserable shelf lives and were impossible to imprint with the new THC warning stamp some states began requiring.

In most cases, pot brownies have evolved into shelf-stable, easier-to-dose chocolate bars, one skew in a wildly popular category of cannabis-infused products that no one saw coming in the early 2010s. In addition to a range of chocolate products from gourmet truffles to peanut butter cups, today’s cannabis consumers can enjoy infused potato chips, gummies, hard candies, raw cacao butter, soda pop, caramel corn, coffee, tea, cookies, pies, and nuts—all readily available at cannabis stores in legal states. They can buy water-soluble cannabis-infused liquids and powders to stir into beverages or add to any recipe for immediate gratification. With such a wide range of culinary opportunities and resources literally at their fingertips, only the laziest or most unimaginative eaters are choosing the brownie.

We stand on a precipice. Once criminalized, cannabis is now being rapidly commodified, and there’s no putting that genie back in the bottle. Analysts predict cannabis will be a global industry worth $57 billion by 2027—investment firm Cowen and Company suggests that will reach $75 billion by 2030—numbers that are respectful enough to prevent cannabis haters like US Attorney General Jeff Sessions (the 21st-century’s answer to Anslinger with legislative power) from prosecuting companies working within legal state infrastructures. Money talks.

Money’s talking. Scotts Miracle-Gro and Monsanto are circling. Food conglomerates are dipping toes, preparing to jump in when—and everyone now agrees it’s a matter of when—federal cannabis prohibition ends in the United States. Hemp is legal, and a bill has been submitted to Congress to legalize psychoactive cannabis. Cannabis is now the second most valuable crop in the United States after corn. Chefs, foodies, and nutritionists are playing with this new functional food ingredient, finding creative uses for every part of the plant, as the world’s attitude toward cannabis normalizes.

This may sound far-fetched, particularly to people who live in places where cannabis remains illegal, where citizens—inordinately, people of color—are rotting in jail because of a plant. It will never be okay that (mostly) white men in suits rake in millions of dollars on cannabis and cannabis products while others go to jail over the very same plant. As we celebrate the strides we’ve made toward liberating cannabis, we must never forget that this progress has been made on the backs of those willing to pay the price before us.