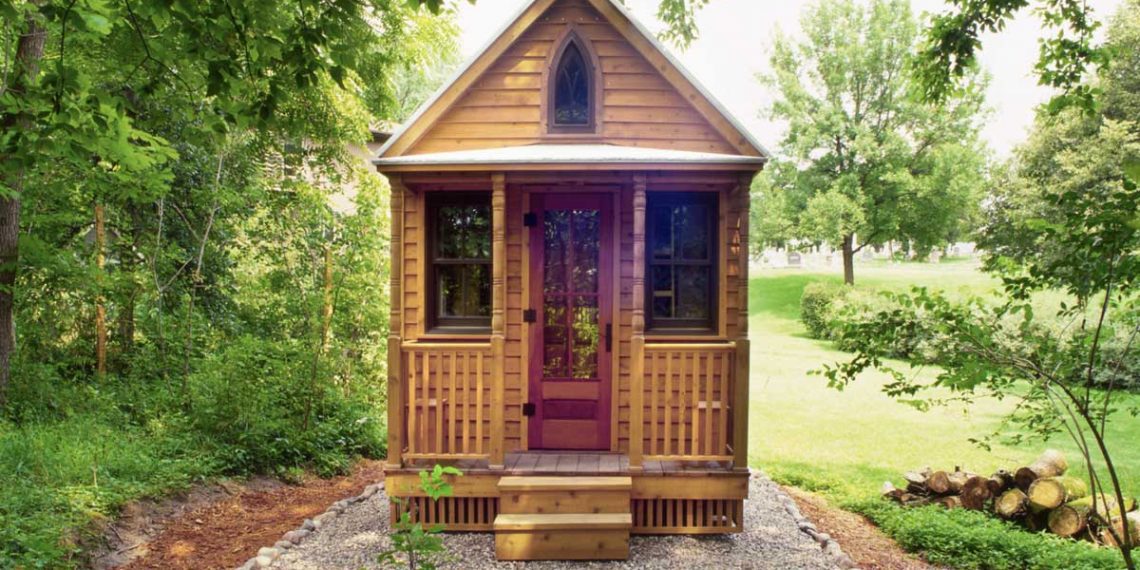 The Scene: Taking out Ethnic Food

“The new normal” is the tagline...

Tiny homes are an obvious solution to housing and climate issues.

I visited Jay Shafer’s meticulous American Gothic—style house in a sun-dappled Iowa City backyard shortly after we launched Natural Home magazine in 1999. The Dow had just surpassed 10,000, mortgage credit requirements were melting into oblivion, and America had a bad case of McMansion Mania. Shafer’s 130-square-foot home (yes, you read that right), built for $40,000, was a hard “no” to all that. It was also cozy and inviting, and Shafer described himself as a claustrophile (someone who loves closed-in spaces).

Shafer won the Philosophy and Innovation Award in our Natural Home of the Year contest because his adorable house embodied everything the magazine stood for, and he wasn’t afraid to say things. He said that we Americans like our homes like we like our food—big and cheap—and he was the first to figure out that putting a tiny house on wheels makes it an RV and therefore not subject to city and county minimum-size standards and codes. He wasn’t shy about his intention to make tiny homes a revolutionary alternative in a housing market headed for disaster.

“I am certainly not proposing that everyone should live in a house as small as mine,” Shafer wrote in the letter accompanying his contest entry. “Such minimalism would be excessive for most people. What I am saying is that the scale of our homes should be as varied as the spatial needs of their inhabitants, and that it is those needs rather than government regulations and conspicuous consumption that should determine house size.”

Shafer’s message was radical, and largely ignored, in the frenzy leading up to the 2008 crash. But his company, Tumbleweed Tiny Homes, built a following, and he built a name for himself as the godfather of a fledgling tiny house movement (one blogger called him “the George Washington of simple and sustainable living”). He wrote The Small House Book and was on The Oprah Winfrey Show. Then he lost the company in a business dispute and his house in a divorce, and he was homeless for a while, living in a pigpen inside a shed. Determined never to live that way again, Shafer designed a 50-square-foot home that cost $5,000 in Sebastopol, California. He gives master class workshops at tiny house festivals around the world (including the Tiny House Festival Australia in Bendigo, Victoria, March 21/22).

“The evolution of tiny houses has paralleled the digital revolution, since this whole tiny thing started at the turn of the century,” Shafer told foxnews.com in 2014. “Once it became possible to have a remote little phone instead of a landline and a wall-mounted flat screen instead of a 2-foot-by-1-foot chunk on the dresser, folks started seeing the potential for living in what basically amounts to a laptop with a roof.”

A Status Symbol for Humble Braggers

Though 82 percent of renters say they would like to buy a home someday, according to Fannie Mae, homeownership is at its lowest point since 1965. Ordinary people can’t afford the American Dream (median listing price: $310,000). In the Bay Area, homebuyers paid twice their annual income for a house in the 1960s; today, they shell out nine times their yearly salary. Only 13 percent of millennial renters in the United States will have enough cash to put 20 percent down on a house in the next five years, according to an Apartment List survey.

Tiny homes are much cheaper, with prices ranging from $10,000 to more than $200,000 (averaging about $65,000), and operating and maintaining them costs a lot less. When the International Code Commission made changes to its residential code to facilitate tiny house construction in 2018, it reported lifetime conditioning costs as low as 7 percent of conventional homes.

That reality is driving the spike in interest in tiny homes, which are getting a lot of attention as a solution to the affordable housing and homeless crises, with the added bonus of being kinder to the planet than a traditional three-bedroom/two-bath. Whether they live in tiny homes for financial reasons or not, climate-aware homebuyers get a status symbol that flaunts their honorable choice to reduce their footprint and live with less—no easy thing to do, even in this post-Kondo age.

It doesn’t hurt that tiny homes—generally defined as homes with less than 400 square feet—are now readily available in every style, from your basic shed to sleek Dwell-worthy models. You can buy plans and build a tiny house yourself or pick out one online and have it shipped to you. You can even order one on Amazon. Used tiny homes, along with inspirational stories and information, can be found at sites like tinyhousefor.us, tinyhousetalk.com, and tinyhouselistings.com. Tiny Home Nation: 10K Strong

More than half of Americans would consider a tiny home, according to a National Association of Home Builders survey. Potential buyers and just-dreamers flock to check out micro-houses, “schoolies” (converted school buses), and vans at tiny home festivals like the Florida Suncoast Tiny Home Festival in St. Petersburg (March 28/29) and the People’s Tiny House Festival in Golden, Colorado (June 6/7). But the reality is that only about 10,000 people in North America—the lucky ones who have managed to find parking spots—actually live in tiny homes.

Like anything that disrupts the norm in a conformist capitalist culture, building a tiny home in a world of ticky-tacky boxes is not easy. The good news is that times are changing, as municipalities consider tiny home villages as a way to house the homeless and marginalized communities. Still, most states only allow tiny homes to be parked in rural areas (Massachusetts, California, Florida, and Oregon are somewhat more lenient). Because most zoning laws in the United States don’t have a classification for tiny houses, most owners have to follow Shafer’s lead and register them as RVs, trailers, or mobile homes.

In most places, zoning ordinances won’t allow you to buy land, park your tiny home/RV, and live happily ever after. You either have to rely on the kindness of family and friends with backyards or pay a monthly park fee to rent a space in one of the tiny home villages cropping up across the country. Park Delta Bay, an RV resort in Isleton, California, now has a row reserved for tiny homes. At Village Farm, an RV resort that’s turning into a tiny-home community in Austin, Texas, residents pay about $600 to $700 a month to park and use the services.

Slowly, city and state governments are responding to homebuyers’ demands for tiny home opportunities beyond RV resorts. Portland, Oregon, (but of course) has relaxed its ordinances to allow for everything from tiny house communities to tiny house hotels. In Rockledge, Florida, citizens demanded zoning changes allowing for a pocket neighborhood with homes ranging from 150 to 700 square feet. A tiny home community for low-income residents is under way on Detroit’s west side, and Vail, Arizona, built two dozen 300- to 400-square-foot houses for schoolteachers.

Advocacy groups have been paving the way for tiny homes since Shafer and a few friends founded the Small Home Society in 2002, and they’re seeing a resurgence. In 2017, a group of University of California-Berkeley students launched the Tiny House in My Backyard (THIMBY) project to promote research and development and raise awareness of tiny house communities. Operation Tiny Home is a national nonprofit that helps people “maintain a life of dignity” through high-quality tiny housing and empowerment training programs.

In Canada, activists calling themselves Tiny House Warriors are taking the revolution to the next level, placing “resistance-homes-on-wheels” along the pathway of the proposed Trans Mountain Pipeline. “We are asserting our inherent, God-given right to our lands,” says Kanahus Manuel, a leader of Tiny House Warrior. “We’re defending what’s ours, and tiny homes are how we’re doing it.”

The Scene: Taking out Ethnic Food

“The new normal” is the tagline…